Several Massachusetts schools have pioneered net-zero energy building systems, meaning that the school building itself produces as much energy as it consumes. While there are several means to generate sustainable energy, including solar, wind, and hydro- 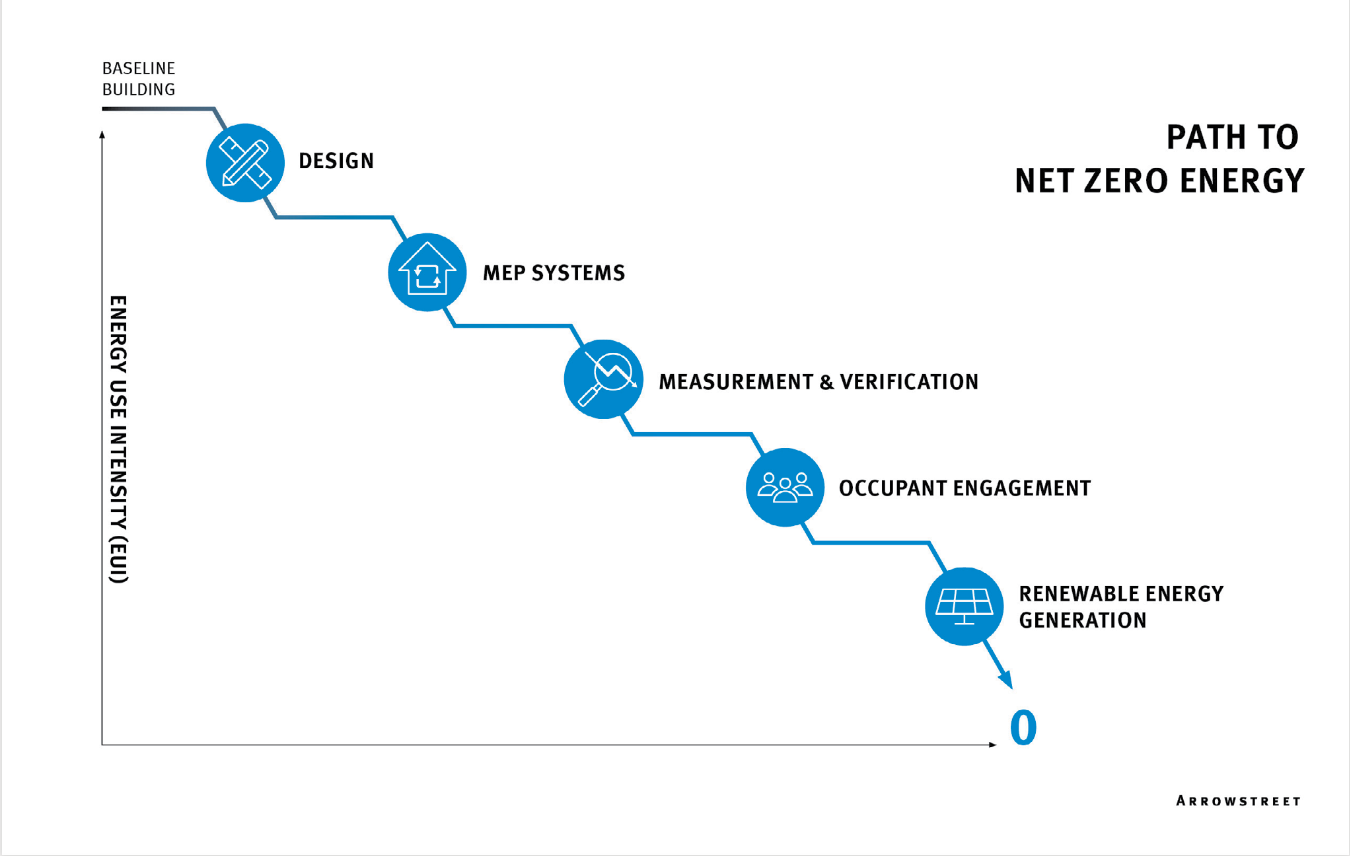 electrical solutions, in Massachusetts the schools have found the most effective approach to be solar; these schools generate energy through solar arrays placed on the roof of the building or elsewhere on the building site, such as on canopies over the parking lot. Every school district that has set itself on the path to net zero energy has taken a different course, and on May 27, 2021, the MSBA hosted a webinar to showcase the paths school districts have taken to achieve net zero.

While solar arrays are the means through which energy is generated, they are effective because of several other building elements. First, the building itself must be designed to be energy efficient, because 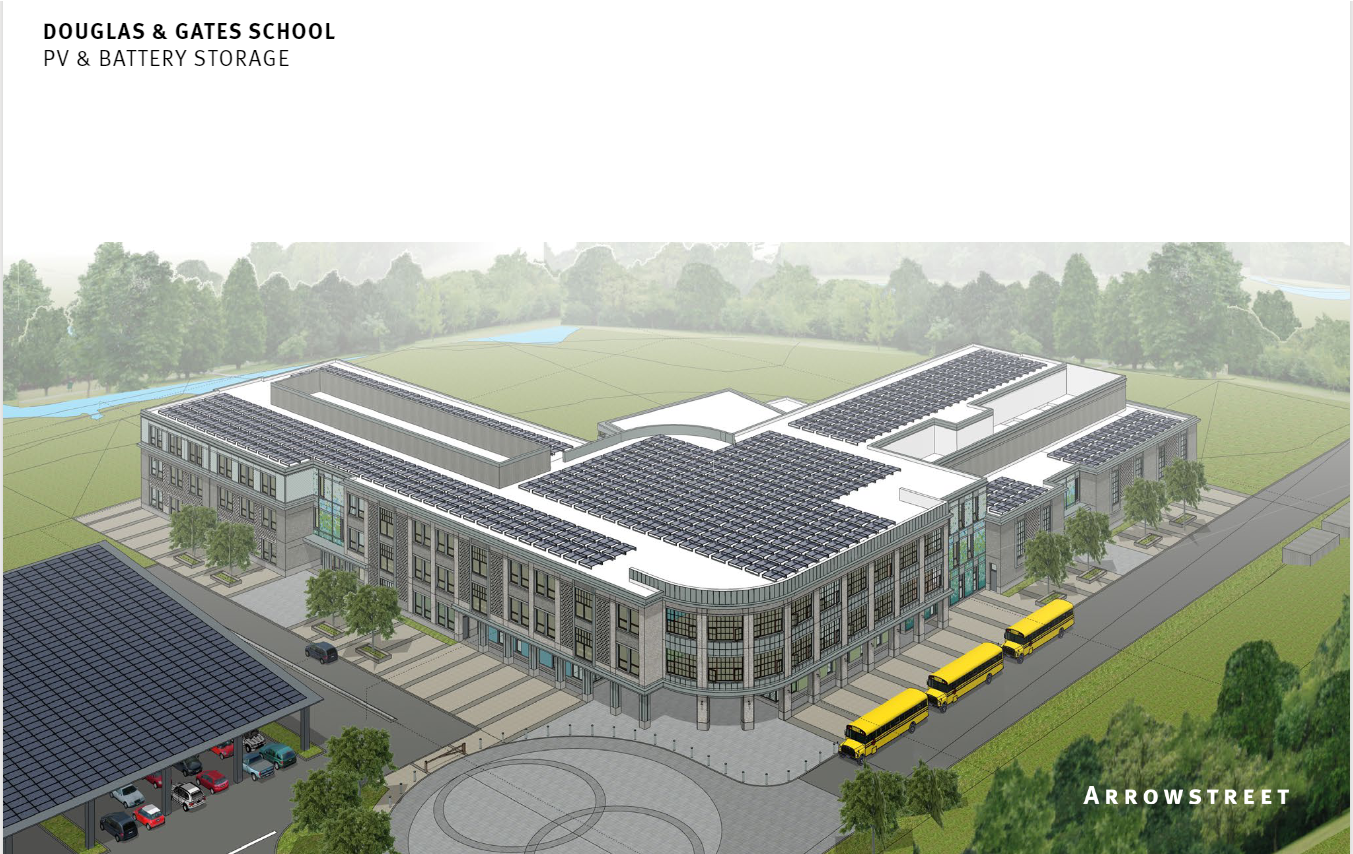 the less energy a building uses, the less energy it needs to generate on site in order to achieve net zero energy. At the webinar, designers presented an overview of the ways in which buildings can be made efficient, including the ratio of windows to walls, the composition of the building envelope, lower floor-to-ceiling heights due to reduced reliance on ductwork, and the way the building is oriented on the site. 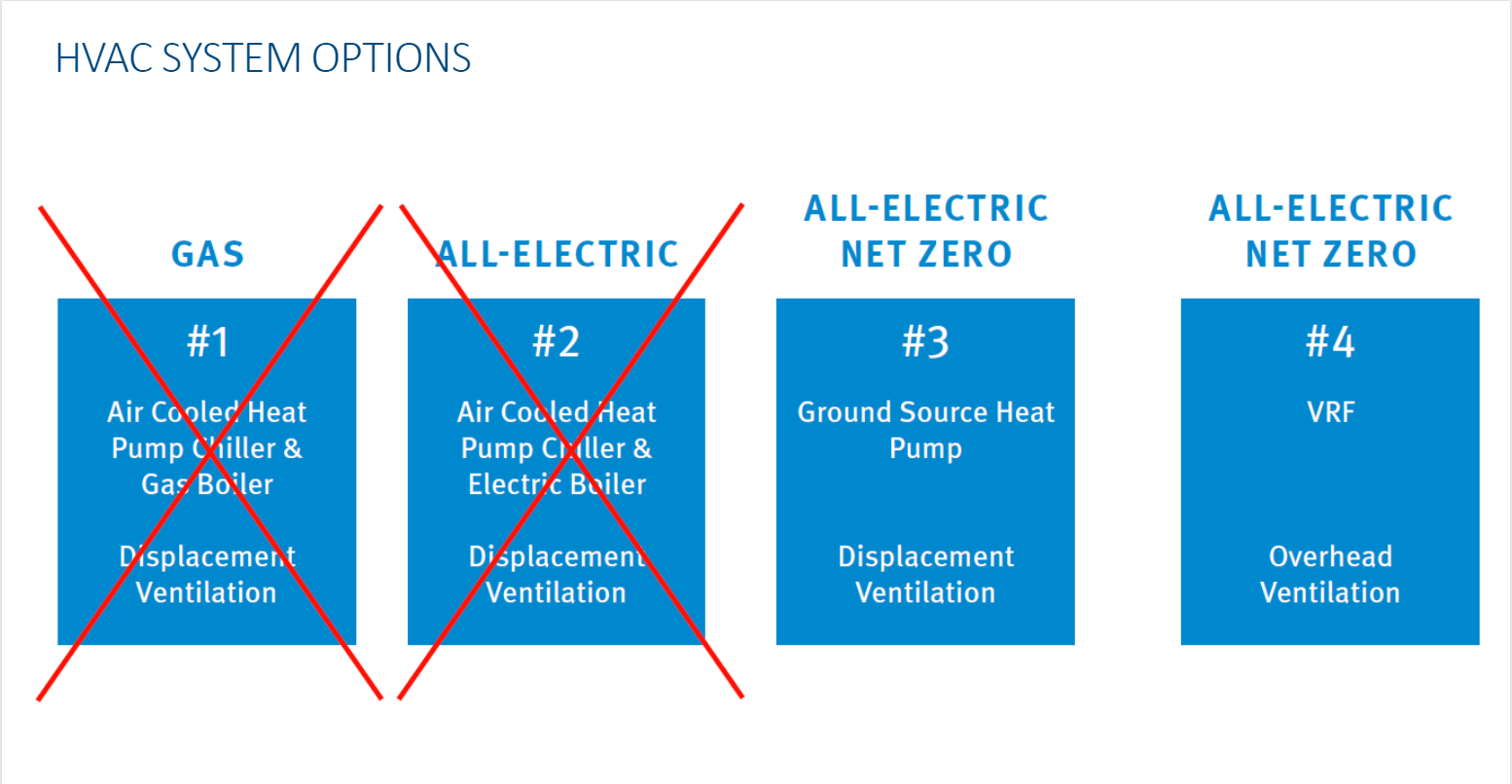 means of wells dug into the ground, where there is a more stable year-round temperature than in the air; the ground-source heat pumps take advantage of this stable ground temperature so that less energy is required to heat or cool the air circulating in the building to the desired temperature.

In approaching net zero, school districts carefully consider both the construction/installation costs and also the maintenance/operation costs of their HVAC systems. While consultants represented at the seminar believe the installation and operation costs of VRF systems to be analogous to the cost of non-electric HVAC systems, most agree that installation of the wells for a ground-source system comes at a higher cost. Some districts and consultants, however, believe that the higher installation cost of the ground-source heat pumps is offset by a lower maintenance cost than that required for VRF systems, pointing to more moving parts and a shorter lifecycle for VRF systems.

When budgeting for net zero systems 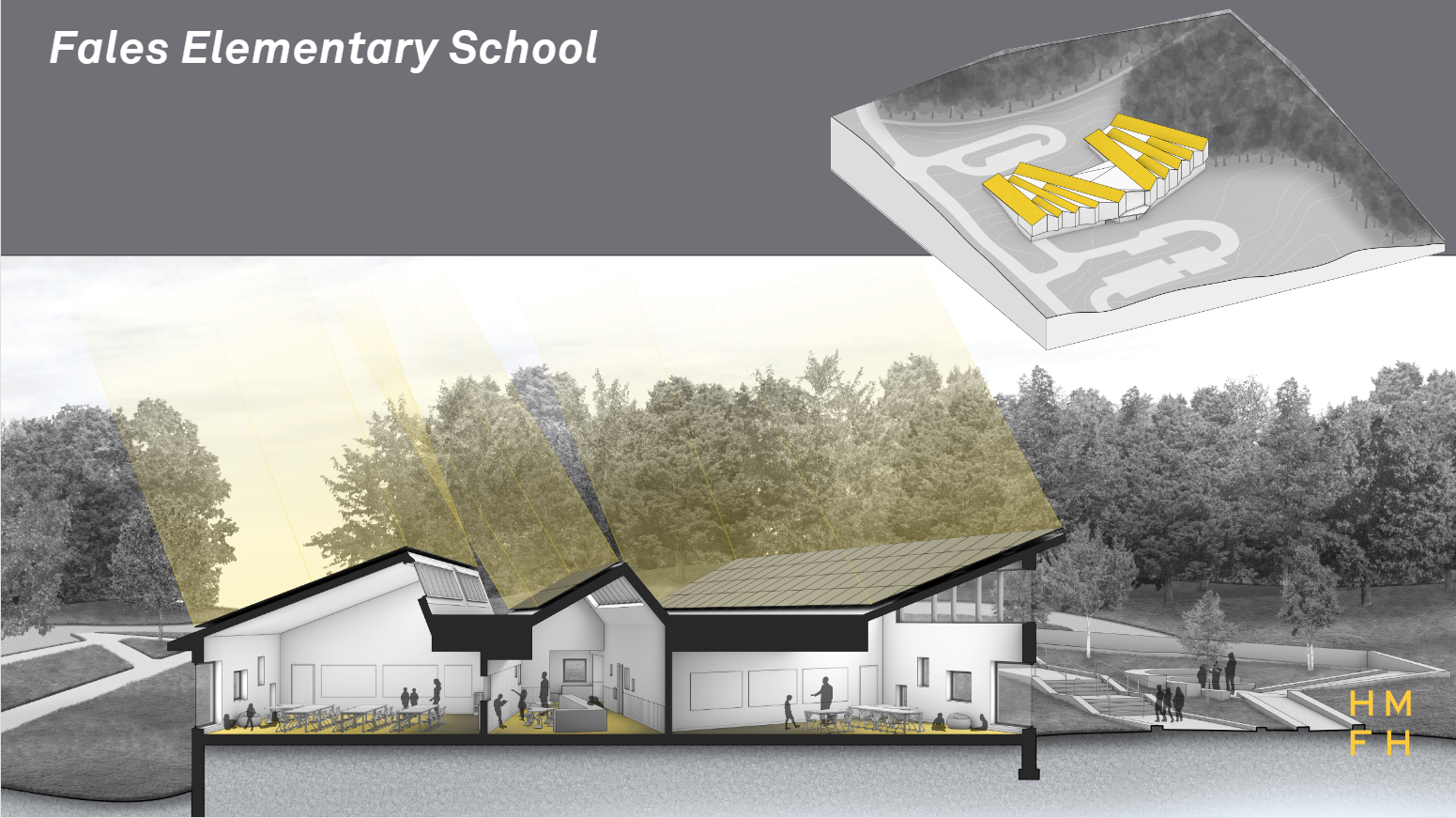 Massachusetts utilities companies, represented by Mass Save, also participated in the program to highlight the incentives and guidance they offer school districts approaching net zero energy.

As each school district approaches net zero energy, they remain focused on the students and staff who will 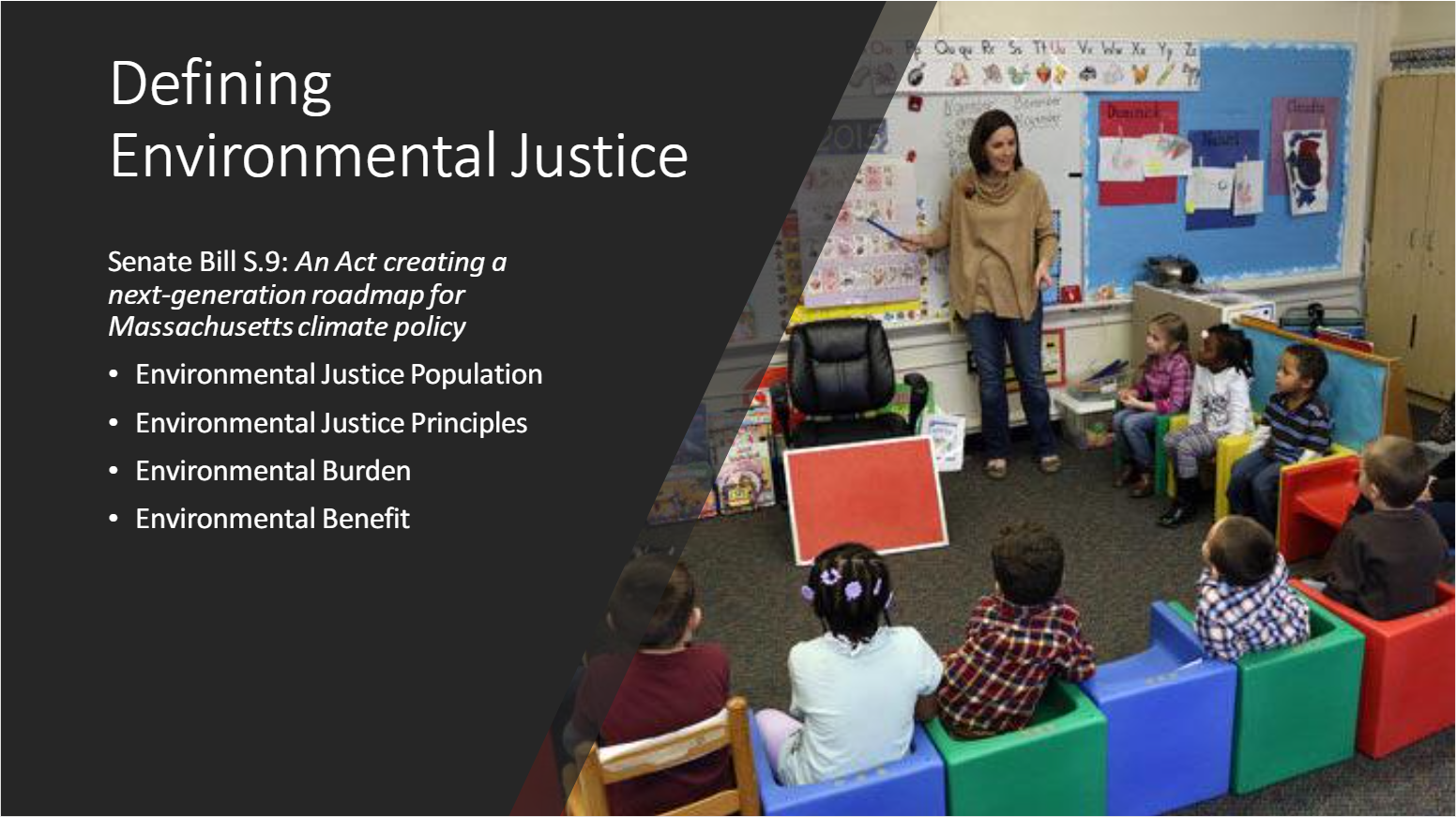 occupy the building. In doing so, school districts discussed their approaches to environmental justice, and how the school buildings themselves can improve air quality in communities where it is poorest, and offer access to green spaces to students who otherwise don’t enjoy such access. School districts described how they were able to use the energy-aspects of the building as a teaching tool within the curriculum. Finally, districts emphasized the importance of education because the choices of the occupants themselves, in their daily consumption of energy, have a large impact on the building’s energy efficiency. Thus, in one new school, teachers shared coffee machines and refrigerators in a convenient space that not only reduced energy use but also gave the teachers more opportunity to collaborate.

All new HVAC systems are technologically complex, driven by controls software, and it is important that the facilities staff are able to operate the building systems, as well as that the buildings are designed to be most conducive to the facility staff’s operational history and preferences. Accordingly, consultants emphasized how important it is for facilities staff to be involved in the design of the building systems, to bring their experience and expectations to the building design, so it operates not just in ways they are used to, but in the ways they would optimally hope. The MSBA is committed to helping all school districts plan for and successfully operate their sophisticated new building systems, including systems achieving net zero energy.

The MSBA is very grateful to all the school districts, designers, consultants, Mass Save representatives, Northeast Energy Efficiency Partnership representatives, and others who came together to share their expertise, experience, and enthusiasm for net zero energy school buildings and to offer such an educational and successful program. You can find their profiles on this page, as well as profiles of the schools that were featured, and the slide deck from the day’s program, together with other material for your consideration.